Listen to the Podcast

(This is not a literal statement. Obviously. Cancer, mass shootings, jet liner crashes, and a thousand other things are much, much, much worse.)

I think I inadvertently penned a Twitter bio all the way back in 2007, before Twitter bio’s even existed, when I launched this site with the subtitle “REFORMED HUSBAND SINNER FATHER ENTREPRENEUR DESIGNER COLD CALLER PROPOSAL WRITER DIAPER CHANGER GOLFER”.

You can see the screenshot (including the glowing electrical lines and amazing blue gradient in all their glory, and which got this here site listed on dozens of CSS galleries around the world wide web) below: 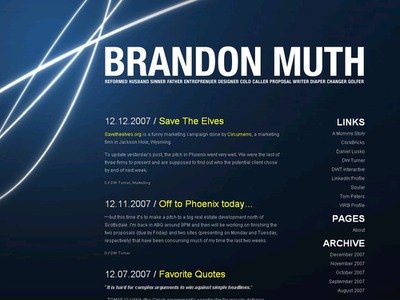 As my kids grew out of diapers I updated the verbiage to “RETIRED DIAPER CHANGER”. As I got back into playing tennis I added “TENNIS HACK”. It was all off-the-cuff, tongue-in-cheek silliness intended to poke fun at the absurdity of having a personal website to begin with.

Then all of a sudden, Twitter blew up, personal branding (gasp!) became a thing and the Twitter bio became seriously official.

For the record, I don’t do well with serious or official. It’s probably the result of growing up extremely poor and off-the-grid. I am tremendously comfortable (perhaps overly) with unorthodox, non-official situations. When learning to go with the chaotic ebbs and flows of alcoholic hippiedom becomes part of your DNA at a very early age, you are NOT AT ALL comfortable in the absence of chaotic ebbs and flows.

But because “going with the chaotic ebbs and flows of providence” doesn’t really work for a respectable personal brand, I approached a mentor of mine several years ago, who instructed me that the easiest way to identify your career title, was to answer the question “what are people willing to pay you money for?” So, like a good mentee, I sat down with pen in hand and paper before me, and wrote in all-caps at the top of the page “WHAT HAVE PEOPLE PAID ME MONEY TO DO?” I then answered the question in list format:

A couple days later I brought it back to the mentor. He read through the list, looked up, took off his glasses, and while scratching his head, said, “Yeah, I don’t know what the hell your job title is.”

LOL thanks for nothing, man!

Much to his chagrin, the list has since expanded to include:

Shortly after exasperating my mentor, I decided to give up on clarifying an official job title. I figured if my mentor couldn’t help me define what I did, it must be a futile effort for sure. In the immediate wake of that decision, my Twitter bio varied between snarky (“Non-bearded, Non-millennial”), specific (“Founder @WooCredits @GoToWP @ModernOliver @MuthCo etc”), snarky-spiritual (“I used to work at a mega-church, then I got saved”), personal (“Married, Father of Four, #HeartEmoji God, family, tennis”) and philosophical/political (“I believe in free markets, liberty and overcoming poverty through achievement”).

I experimented with this approach for a few months. None of them stuck. None felt right. And none helped me connect with people in any more meaningful ways than before. So for the next few years, I slapped “Entrepreneur” on my bios and rolled with it. What I like about “entrepreneur” is it’s broad enough to not cause too much conflict between all the things people have paid me money to do, and generally carries with it a sense of trying new things, innovating, hustling, improvising and being comfortable with change – all things right in my wheelhouse.

1) It’s not specific enough to create meaningful connections with people who might be interested in working with me, as it could cover every industry and discipline under the sun. While the list of what people have paid me money for, is perhaps broader than some, “entrepreneur” doesn’t touch medical, engineering, real estate, finance, sports and a dozen other disciplines that people are entrepreneurial in – and areas I have absolutely no experience in.

2) In my mind, the term “entrepreneur” successfully captures people who turn startups into bazillion dollar businesses. Guys like Steve Jobs, Bill Gates, Mark Cuban and Richard Branson come to mind. While I suppose turning something you create into a bazillion dollar business would be nice, it has never been an energizing motivational driver for me.

Putting my twofold dislikes together, I suppose you could say the term entrepreneur was broad enough to cover all the bases, but too vague to help identify the work I most enjoyed doing.

Sigh. (But, we also might be onto something here.)

Painters and Hackers is a book (really, a collection of essays) written by a guy who started some 1990s web startup that he then sold for millions before the dot com bust. My father-in-law gave me this book two Christmases ago and said “This guy is the closest I’ve seen to capturing what you do.”

I read it over the course of the next week. I felt at home, understood, and, most importantly, at peace. To state it bluntly, I felt I had found my people. Or at least my person. One other individual who had experienced similar things and thought in a similar manner. (Very similar to when I visited Amsterdam with my wife, and upon observing everyone in the streets was 6′ 4″ and taller, turned to her with a smile on my face and declared, “I’ve found my people!” – I’m 6’7″ and much more German than Dutch, but it was an experience I’ll never forget).

But then, near the end of the week, at the back of the book, he hit on a blunt assessment – one which I subsequently discovered Thomas Sowell has hit on as well – namely, that art, hacking and creativity are the most difficult (sometimes nearly impossible) things in a market to monetize, and many times, this trifecta of disciplines (ones that apparently comprise the core of who I am), aren’t monetized until long after the death of those purveying them.

Just when things seemed to be crystallizing, I was told, “Congratulations! You now know the answer to the question ‘What do you do?’ Oh, but, by the way, just so you know, you have practically zero chance of making a living from it. Good luck!”

The next couple months were exhilerating, tremendously relieving, but also very sobering. I kept telling myself, “Ok, you finally have clarity on what you do, but the chance of getting paid to do it is slim.” So I sat, pondered and prayed.

I leaned on my tennis training, which emphasized going back to establishing basics in the face of momentum resistance. I read essays and old books on the topic of vocation and the dignity of work, for the sake of work itself. I camped out in the Book of Proverbs and reread many free market economic books.

I discovered, or more accurately, was reminded of, two things.

First, hard unglamorous work is championed throughout the Bible. Verses like Proverbs 6:6 (“consider the ant and be wise”), 1 Thessalonians 4:11 (“aspire to live quietly, and to mind your own affairs, and to work with your hands”), Colossians 3:23 (“whatever your hands find to do, work at it with all your heart as unto the Lord and not unto man”) all took on vibrant new meaning.

Second, an age old free market economic principle jumped out of my library of free market economic books and hit me square between the eyes: free markets eliminate inefficiencies. The train of thought that followed went something like this: In order to be efficient, I must be energized. Trying to answer the question “what I do?” saps all my energy. Therefore, the most efficient use of my time is to ignore the question altogether and just work.

So, as I neared my 40th year on earth, for the first time ever, I rejected outright the question “what do I do?” I put my head down and focused on creating data art and improving my WordPress plugins. At some point along the way, I also decided to modify the question my mentor posed. After thinking about it for a while, I updated the question to: “out of all the activities I have done in life (whether people have paid me money for them or not) which ones do I derive the most energy from?” (Again, the thinking being I would maximize efficiencies by maximizing energy). It turns out the modified question was much easier for me to answer and actually narrowed the list quite a bit. The updated list is below:

At this point, you may be thinking, “Dude, this guy is almost forty and he’s still clarifying and refining his professional taxonomies?!” If you’re thinking that, you’re absolutely right (except I’ve already turned 40!). And I think more people would benefit if they adopted a similar growth mindset. Our culture is so obsessed with binary assignments to professional life. You’re either a success or a failure. You’re either smart or stupid. You’re either rich or poor. You’re either the best or you’re not. The pressure these binary assignments place on people can be absolutely paralyzing if you let them take control of your mind. They will hijack your work, dismantle your productivity and send your enjoyment of your work into a tailspin.

So what the heck is the takeaway, you ask? I believe the nugget is this:

The quickest way to find career clarity is not by answering “What do I do?”, but by articulating “What attributes among the activities I’ve done energize me the most?”

When I sat down to articulate these attributes, the clarity that had been so opaque, elusive and frustratingly absent for nearly two decades, crystallized almost instantaneously: complexity, connections, creativity and curiosity.

I took those four words and massaged them in a personal mission/purpose sentence, which read:

I am energized by solving complexity, through identifying connections via creativity fueled by curiosity.

LOL. Now that I type it out, and read it, and realize it will be broadcast to the world when I hit the big blue Publish button on this WordPress admin page, it sounds like complete corporate gobbledygook!

But, that’s ok. Because it makes total sense to me! And I hope it will help you make sense of what you do too. Not by copying my personal mission statement, or trying to massage it to fit your Twitter bio, but by taking some time to consider the attributes of your life’s activities that energize and motivate you.

So, after all this, what’s my official job title? Ha! I still have no freaking clue! But I do have refreshing clarity on what type of work energizes me, which is keeping my efficiencies at all time highs, which in my estimation and understanding of free market economics, gives me a fairly decent chance of not being eliminated by said free market anytime soon.

Posted in Members Only.
Share
←  NewerI’ve Given 150 Lyft Rides Over the Last 3 Weeks
Older  →What Does It Mean to Be a Christian?

We use cookies to ensure that we give you the best experience on our website. If you continue to use this site we will assume that you are happy with it.OkNoRead more
Revoke Cookies